Posted at 08:11h in Asean News by ABP-admin
Share

ASEAN with a population of over 650 million people and a combined GDP of over US$ 3.2 trillion in 2019
is increasingly becoming a focus market for global companies looking for stable and high growth
opportunities. While Singapore is home to less than 1% of ASEAN’s population, it contributes to more
than 11% of the ASEAN GDP. Singapore ranks 2 nd globally in the 2020 Doing Business study conducted
by World Bank followed by Malaysia and Thailand at 12 th and 21 st , respectively.

The business-friendly regulations, political and policy stability, superior business and public infrastructure,
extensive network of Free Trade Agreements (FTAs), tax and cost competitiveness and skilled workforce
have all contributed to Singapore’s emergence and continued growth as a global economic centre. A well-
developed capital market and presence of a vibrant network of strong local and global banks has added
to the lure of Singapore as a gateway to ASEAN.

International trade and foreign direct investment (FDI) have become the key to the growth of the region
and the reason for disparity in economic performance amongst member states in the recent years. In
2019, ASEAN total value of merchandise trade was US$2,815.2 billion. As a trade hub, Singapore was
the largest exporter of goods in the region, with a share of 27.5% of the ASEAN total exports, followed by
Malaysia (18.6%), Viet Nam (17.3%), and Thailand (16.7%).As for imports, similarly, the largest importer
was Singapore with a share of 25.8% of ASEAN total imports. 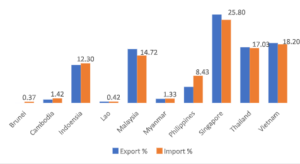 While it is easy to gloss over the large contribution by Singapore to the ASEAN numbers by saying that a
large part of the import and export from other ASEAN countries happens through Singapore, this is
precisely the reason that makes Singapore the big brother of ASEAN. Singapore has ranked 1 st for a
number of years, in the World Bank’s Logistics Performance Index and also in the efficiency of customs
clearance of goods. The ASEAN total value of trade in services in 2019 was US$ 844.6 billion and here
again numbers indicate Singapore punching way above its weight. Singapore accounted for the highest
share in ASEAN’s total trade in services at 47.8%, followed by Thailand (16.6%), Malaysia (10.0%), and
the Philippines (8.2%).

While total FDI inflows to the region amounted to US$160.6 billion in 2019, the inflow into Singapore was
disproportionately high (57.3%) at US$ 92.1 billion. US$ 16.0 billion of the FDI inflow into ASEAN was
from Singapore, and even if this entire amount is reduced from the FDI number from outside ASEAN into
Singapore, the net FDI into Singapore US$ 76.1 billion still remains disproportionately high.

Singapore is the preferred choice for setting up the regional head-quarters office as compared to other
key Asia (not just ASEAN) hubs for almost 50% of the Global Fortune 500 companies . The high density
of headquarters, centres of excellence, research centres, and a vibrant start-up ecosystem that provides
ample partnership opportunities has set in motion a virtuous cycle that ensures Singapore remains the
first port of call for any company looking to enter ASEAN both for trade and investments.  The Global
Financial Centres Index (GFCI28) survey by London-based thinktank Z/Yen and China Development
Institute ranks Singapore as the 6th most competitive Financial Centre in the world. The next Asean
centres on the list are Kuala Lumpur at 41 and Bangkok at 58, way behind Singapore. This is a reflection
of the pivot position that Singapore enjoys as financial centre of choice in the region.

Tencent, ByteDance and Alibaba have joined other Chinese startups to set up shop in Singapore and
made substantial investments over the last couple of years with an eye to use this as their launching pad
into the region. Singapore is now home to the largest collection of Chinese-owned technology companies
outside of China. This adds to the international coterie of technology bigwigs like Google, Amazon,
Facebook, Salesforce and Stripe that already have headquarters or significant operations, including R&amp;D
centres in Singapore. Regulations have played a big role in attracting these companies especially related
to tax perspective, making it an intuitive choice for regional headquarters.

The number of Single Family offices based in Singapore has grown to over 200 in recent years.
Singapore is home to more than 50 billionaires including many who have moved to the city from other
locations. High Net-worth Individuals (HNIs) typically seek safe harbours for their investments –
environment insulated from economic, financial, regulatory and geo-political risks. The city-state finds
favour amongst HNIs also on account of the lower tax rates. 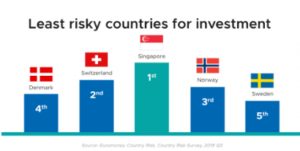 While, the other countries in the region are also trying ease business climate with Vietnam emerging as a
strong player by offering fiscal incentives and competing fiercely for attention of global investors and
businesses. However, the technology-driven transformations pose additional challenges for policy makers
in ASEAN, as disruptions and instabilities impact the way of doing business as can be seen in the last 12
months by the impact of COVID-19. This makes predictions problematic and less reliable, but one
continues to see the Red Dot staying relevant and grabbing attention of investors and technocrats as an
accelerator for start-ups and innovation.

The recent political developments in Myanmar, the continuing civil protests in Thailand, the political
instability in Malaysia as a fall out of 1MDB scandal and the unpredictability of Duterte regime in
Philippines make ASEAN waters appear choppy and difficult to fathom for overseas investors and
businesses. Singapore stands-out as a lighthouse in the middle of all this uncertainty. Marco Pierre
White, the famous British Chef-restaurateur may not have exaggerated when he said, “I think Singapore
is one of the great cities of the world”